Cut of a Knife

Background
Cut of a Knife is the first in a series of four novels based in Hobart, and features Detective Inspector Oscar Noones and Detective Constable Anna Pine. The style is at the gritty end of crime fiction but is leavened with a significant amount of dark humour.

The novel has a planned release date of June 2021.

Comments
The sample is from Chapter Three.
Noones is returning to work from medical leave after being abducted and tortured.
On his first night back he is called to a murder at Rangaroo National Park.
He begins by addressing the Pathologist, Dr Everard. Anna and fellow DC Sharon Carr are also present. 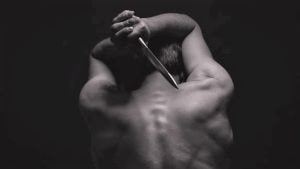 ,
A sample from the novel:
Cut of a knife


​“Evening, Stiffy.”
“Inspector. Glad you’re back.”
It was the briefest exchange, but Anna could feel the weight of shared history between the two men. Old friends
“Right then. Someone get me up to speed?”
Sharon drew Noones’ attention to a tall, wiry man slumped against the side of a nearby wooden seat.
"Sir, that’s Terry Williams. The Park Ranger who found the body."
"And that," Everard butted in as his left hand pointed to a spot near Sharon's feet, "is the regurgitated remains of Mr Williams’ dinner."
Anna and Sharon took an involuntary step back. Noones moved the other way, getting as close to the table as possible. The artificial lights continued to play tricks, and when Noones leaned over the body it reminded Anna of a vulture poised atop its prey.
"So, what’s your best guess?" Noones asked the pathologist.
"Some sort of packet beef and rice dish I should think."
A blink and you'd miss it grin tugged the corner of Noones’ face.
"No, not the vomit. I meant what happened to this poor bastard. Was he alive when Williams found him?”
“Yes, although not for long. He was trussed up inside a giant picnic umbrella of all things which my guys have already tagged and taken away. I need to run the tox screens, but more than likely our victim was drugged beforehand. Williams had given the umbrella a decent prod and got no response.”
“Must have thought he was hammered,” Noones replied, “or maybe the butt of a stag night joke? Wouldn’t be unusual up here and we’re skirting around the bleeding obvious. Our deceased is dressed in a chicken suit.”
“Good to see you haven’t lost any powers of observation,” Everard said. “But of more interest is how our feathered friend was despatched. A sadistic mind at work here, Oscar. The internal mechanism of the umbrella had been tampered with. Three of the metal spokes had been cut and bent, the points fashioned into small arrowheads. Two were pressed under the ribcage and the other into his neck.”
“I don’t need to be a genius to guess what happens next. Instant chicken kebab.”
“Exactly. Williams pulled on the umbrella arms to release him, and bingo, the prongs drilled straight into the heart and carotid artery. Williams pushed the arms back in again as soon as he saw what was going on which unfortunately was the worst thing to do. It made our man bleed out like Vesuvius erupting.”
“No wonder he lost his meal. Whoever did this has gone to a lot of trouble and obviously wants attention. The questions are, whose attention and why?”
"One of your easiest cases though, Oscar. Technically, the killer is standing fifty yards away."
"I don't think we’ll be pressing charges against Mr Williams any time soon. Sharon, can you cover off Williams’ interview in the morning? I doubt we’d get much out of him tonight, but he is still our best hope for a lead. Do we know who our victim is?”
“The techs went through his pockets,” Sharon answered. “Nothing.”
“Damn. Tell the rest of the team that any plans they had for the weekend are cancelled? A meeting at nine am.”
Noones seemed to notice Anna for the first time.
"And you are?”
"DC Pine, sir. I started with CID this morning. Can I help with anything?"
"Have you worked a murder before?"
"No, sir.”
“A major crime scene?”
Anna shook her head.
"In that case, I’ll give the wheel of possibility a spin anyway, but I don’t think any of us will be surprised if it lands on ‘Not much help whatsoever’. So, here's what I need you to do: keep out of everyone’s way, don't touch anything unless you’re asked, and generally don't cock anything up. Stick to that and we'll be off to a reasonable start."
Anna and Sharon began to move away, but Noones called Anna back.
“Before you go, It might be a good idea to work out if we should even keep you around. Any thoughts?"
Anna processed the images she had seen since their arrival and tried to sequence her thoughts. She was damned if she was going to let him treat her like shit on a shovel.
"I don't think he got a look at his attacker."
"Why?"
"The whole set-up works on the assumption that someone would open the umbrella without checking. That’s a huge risk to take. If our victim survived, he could have made a positive ID."
Noones gave a curt nod.
"Not bad. I hope you have more, and better, insights to share because we need to find out who did this in a hurry. A setup this elaborate? I think our killer has even more in store for us. It’s not only the weather that tells me we’re about to get pissed on from a great height.”​